How to change my distro on dual boot, 2 hard drive desktop?

I have a desktop with 2 hard drives, and some months ago Vasileios helped me set it up as a dual boot with a grub menu. 1 Drive has Windows, the other has Ubuntu Budgie. I would like to install a different distro on the linux drive and need a step-by-step procedure so I don’t mess it up lol.

The basic synopsis is to run your LiveCD USB just like when you installed Linux the first time via that thread and overwrite the current Linux install. This was your thread that @vasileios helped you in I believe. Give it a read to refresh your memory.

Dual boot Windows/Linux when your computer has 2 hard drives? Questions

My Windows computer has an HHD and an SSD. Can you dual boot with Linux in this situation?

My suggestion is right down the steps you took from vasileios help and follow them again.

Thank you! I will re-read that thread and see if I can get it figured out.

I re-read the thread and my head was spinning again lol.
However, I managed to get to the Bios menu on bootup and ran Zorin off of a usb.
I clicked ‘install’ just to see what would happen and stopped at this point.
Can you confirm that this is the correct option in order to overwrite Ubuntu Budgie on that particular hard drive? 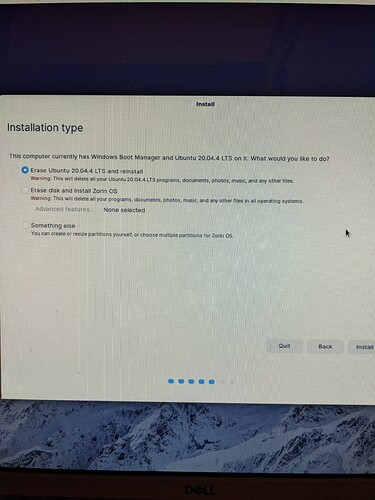 I am sorry @LibertyMom I cannot confirm as I’m not in front of it, I have no idea which disk its wanting to “erase and install Zorin” there are no changes made at this point so until @vasileios can make a recommendation I’d wait. I really have no experience with dual boots of any sort.

IF it were my system and I had to hazard a guess, I would lean toward erase disk and install Zorin, but again, from my standpoint I do not know what disk it’s referring to.

I agree. I can’t tell which disk it’s talking about either! I thought it was just me. Thanks for your advice. Hopefully @vasileios will see this and set me straight.

Hey @LibertyMom!
I’m a bit over my head with a deadline for today. The solution appears to be simple. The first option discovered that you have both Ubuntu and Windows. So, it offers to delete Ubuntu and install Zorin on it. If you select this method, make sure that the window that pops up before the partition commits shows that it’s the sdb drive that is affected and not the sda.

Note: You can make sure that your Windows is installed on the SDA if you select the “Something Else” and then continue. Once you see the NTFS partitions, the device (if it’s indeed the SDA) that holds them is your Windows one. At that point you can select to cancel and go back to the previous image, like your screenshot and select the first option. However, once you hit to proceed, make sure that the window that pops up does not affect the drive your Windows is installed on.

My personal approach would be a bit different, though it may sound a bit complicated. What I generally do is disconnect the drives I don’t want affected. Then I install the Linux OS fully on the disk I want. Then, I shutdown the computer and reconnect the other drive.

From the BIOS setup, I set the boot drive to be the second one (the one I installed Linux on). Once it boots up, I open up a terminal and do the following:

Once all is done, I make sure I have OS-Prober installed.

This one will find your Windows drive and boot-loader. However, your second drive will now be your main one. This is by far the safest method when everything else seems foggy.

Up to you how you want to proceed.

Hey Vasileios! What if I hit ‘Something Else’ and select the /dev/sda3 Ubuntu LTS partition for the Zorin installation? Can I do that? 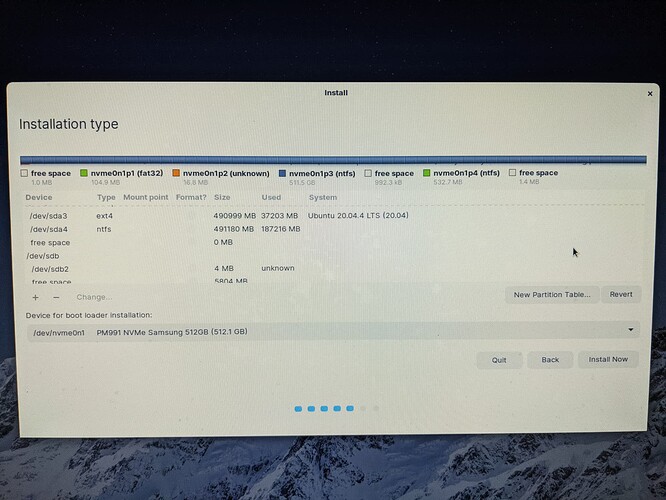 PXL_20220805_2256113151920×1440 304 KB
The reason I ask is that I believe we set that drive up to both house the Ubuntu installation AND also have a partition available for storage for both Linux and Windows. I just want to change Ubuntu Budgie to Zorin. Please let me know if this would work? (I have 3 other pictures of this screen showing all the drives/partitions if you want to see them too.)
vasileios August 6, 2022, 4:40pm #9

Hey, @LibertyMom!
The short answer is yes, you can do so. However, my question is: Do you want to host both Linux distributions or just one?
If it’s both, then you’ll need to resize the Ubuntu partition so that you create a space big enough for both Ubuntu and Zorin. You can do that via the Gparted app on your Zorin’s live USB - as you can’t resize a partition of an OS that is actively running.

Then, when you select the “Something Else,” make sure that your /boot partition is the same as your Ubuntu and then select the newly formed /dev/sda4 for your / (root) partition for Zorin.

I just want to host Zorin only and do away with Ubuntu Budgie. So just to confirm, after backing up my data that’s in Budgie right now, I can install Zorin using the ‘Something Else’ option, and choose the /dev/sda3 Ubuntu partition for the installation, correct?
Will it write right over it?
What will happen if Zorin (Pro) takes more space than the current Budgie installation?

@LibertyMom that should work. If I understand correctly, you did NOT resize the partitions, you want to keep the WindBlowz for dual boot, and just the zorin to replace the ubuntu (after backing up)? If my assumptions are correct, then yes, you would choose the partition that houses only the distro of which you are replacing, for install. it may ask where to put the boot record - that is where I ran into issues and just went ahead and did the whole disk install for lubuntu.
Cheers!!

Thanks BigDave. Well I hope it doesn’t ask me that because I want to leave the rest of the drive the way it is.
What would happen if the Zorin Pro installation is larger than the partition?

Hey @LibertyMom!
A full installation of Zorin Pro does not require more than 5GB, so you do not risk not having enough space. You can give it 60GB to start with and see how it goes from there (including your home folder).

In general, each Linux distribution will need its own partitions as two of them cannot co-exist due to package, file, and configuration conflicts.