New at this, but want to get it. With great help from this site, I installed Linux Mint on a MacBook Pro. I want to switch an iMac High Sierra over to Linux. I haven’t found anything that’s specific to iMac High Sierra beyond partitioning, but I don’t want to partition.

I tried the same live USB to install Linux Mint, and seem to have success, but when I restart, I come up with a black screen that doesn’t resolve.

I looked up issues with black screen at start up, but didn’t find anything that helps with my issue.

Any thoughts or suggestions?

Did you try pressing Option key while booting up? My super old Mac would show me drive option to pick the operation system, then I get to pick the installation USB…

The page linked below sounds similar to your problem.
The link talks about a dual boot system but what you will be looking for is the partition that has the directory /boot/grub which should contain the file grub.cfg
If you run into snags post back here with questions. 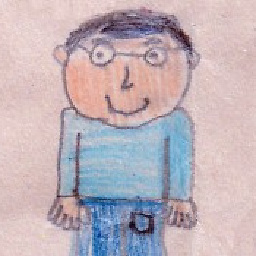 Thank you for your reply!
No, I didn’t. I’ll try it tomorrow.

Thank you for your reply!
This is the one I saw that focuses on partitioning, which I’m not interested in. The other issue is that I no longer have access to Mac OS since I installed Linux.

Follow those instructions that pertain to finding the grub.cfg and modify it using the process described in the article.
If you cannot boot from the original USB drive then you may need to modify how it boots also (explained in the article) or try another linux distro just to boot into a live linux os and modify the boot.cfg on the hard drive. The grub.cfg modifications are not dependent on partitions, the partition with the grub.cfg is all you need to worry about. When you boot from a USB drive you can modify the kernel parameters by editing the kernel boot line from the grub menu during the initial boot of the usb drive.
Add (quote from the article) " ‘nomodeset’ and ‘radeon.modeset=0’ after the ‘quiet splash’ "

The very last post, by Andrew, in the article is pretty straight forward but remember to update grub “after” the reboot as he mentions at the end of his post.
He doesn’t use the chroot as the post above his did. So he needed to update grub after the reboot.

Thank you. I’ll check it out. I’m very new to this and usually find myself in a spot where I’m just not getting it, so will probably have questions as I go. I hesitate to go with another distro because it was a long process to get my last machine to take a USB…

Pressing the Option key allowed me to install again, but, at restart, I got the black screen again. I’m checking out what Dennis suggested.

First issue. When I have the USB in another machine, two names and icons come up for it. One is named “Linux Mint 21 Cinnamon 64-bit” (I named it). The other is named 'Writable". I did nothing to create this, didn’t name it, and have no idea why there are two icons that pop up.

My first guess on “Writable” is that whatever you used to create the USB created Writable so you could have a persistent /home and be able to save modifications to the operating system or desktop environment from session to session when rebooting the USB. For example, if you changed the background on your desktop while running the USB it will ‘normally’ be for just that one time running the OS. Upon reboot those changes would be lost. With a persistent /home the changes would be saved to, in your case, Writable so the changes would be used during the next reboot.

Next issue, I can’t do anything with Mac OS on the iMac. After joining WiFi, when at the screen where I can choose EFI Boot-pic of hard drive, I get the black screen. If I select the EFI Boot with the USB pic, my options are:
Start Linux Mint 21 Cinnamon 64-bit
Start Linux Mint 21 Cinnamon 64-bit (compatibility mode)
OEM install (for manufacturer)
UEFI Firmware Settings

My only option is compatability mode - this is where I can get Linux onto the machine. I can edit here, and this is what I get:

At the bottom it says:
Minimum Emacs-like screen editing is supported. TAB lists completions. Press Ctrl-x or F10 to boot, Ctrl-c or F2 for a command-line or ESC to discard edits and return to the GRUB menu.

One thing i noticed with the last attempt to install was a message that said cdrom fail. So I’m guessing that there’s an issue with the live USB?

If that’s the case, I can try another USB or another distro?

I’m trying to use Mint because I have a ton of files created in Word and can’t afford to spent time figuring out how to reformat…if that’s an issue in another distro.

It can get a little confusing going from the computer boot menu to the USB grub boot menu.
When you choose the “EFI Boot with the USB” that is the boot menu from your computer. After that you get to the Grub menu that is from the USB stick. That menu will stay on screen with a ‘timer’ running at the bottom for 10 seconds then it will boot the ‘highlighted’ line.
If you press the space bar the timer will stop. Then use the up or down arrow keys to move the highlight up or down. If you have a little time I will post a couple pictures to help show what I would like you to do. It will take a few minutes before I post them but I want you to try something that could be a short cut to resolving your problem.

If you press the space bar the timer will stop.
Then make sure the top line is highlighted, on yours it will be “Start Linux Mint 21 Cinnamon 64-bit”. After highlighting by using the arrow keys then press the Tab key and I’ll post another picture. 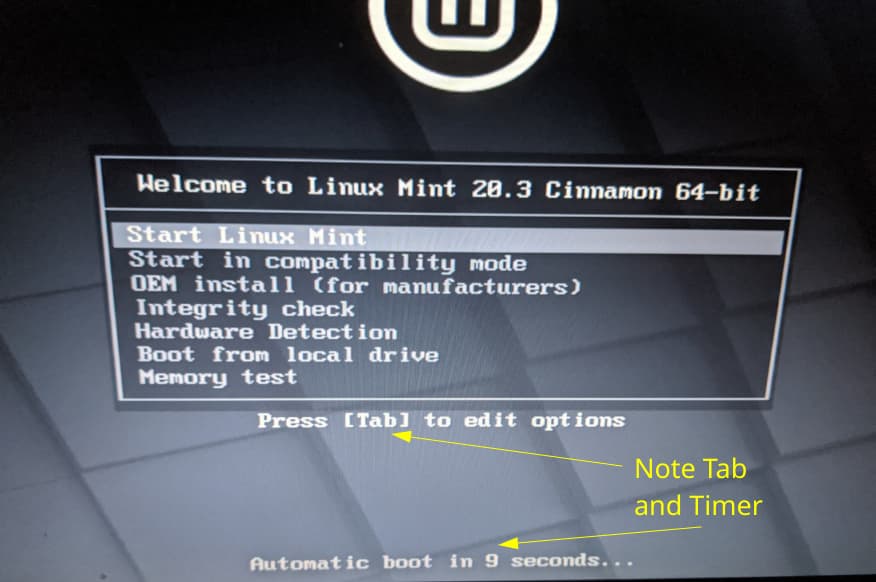 After pressing Tab a new line will show at the bottom of the selection window your cursor is the underscore. Now simply type " nomodeset radeon.modeset=0"
without the quotes but keep the space in front of nomodeset. When done it will look like the next picture. 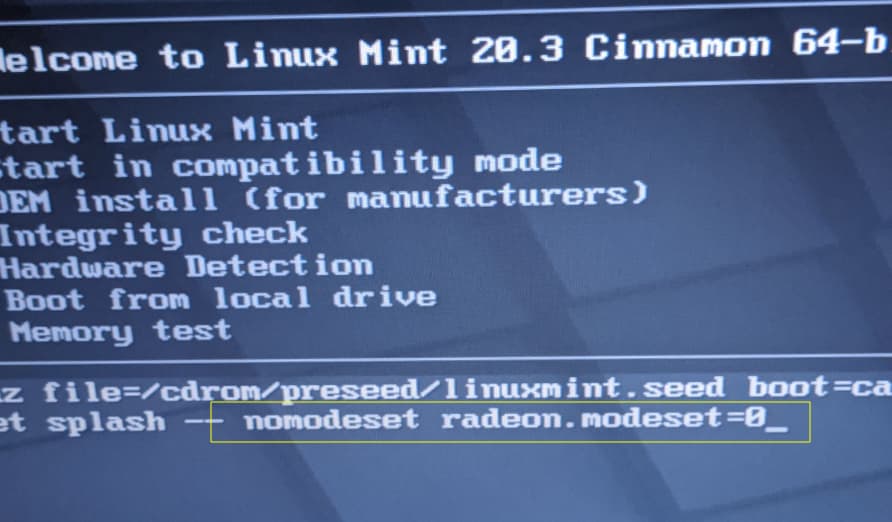 Now if you press Enter it will boot into your Lnux Mint 21 on the USB stick.
When you get that far then let me know and we will decide which way to proceed.

When I select Start Linux Mint 21 Cinnamon 64-bit and hit the tab key, I get a black screen with one line about a third of the way down…

Copy flashed up and all that I could catch was failed. Linux start up music, and black screen…which doesn’t resolve.

If you select compatability mode will it let you hit the tab key?

No. I get the line 1/3rd down the screen, and Linux starts downloading from the USB.
Once done, I can move forward with installing from the desktop, but when I restart, I get the black screen.

Not when either is highlighted.

I never see a countdown on the screen Here’s all that I see:

At the bottom it says:
Minimum Emacs-like screen editing is supported. TAB lists completions. Press Ctrl-x or F10 to boot, Ctrl-c or F2 for a command-line or ESC to discard edits and return to the GRUB menu.

Hitting tab does nothing.