Guys, I installed Linux mint on the hard drive of an old Asus laptop and it worked perfectly.

I did a “Dual Boot” yesterday on my HP Pavillion using the same USB/ISO file and once the OS booted it could not recognize my wifi.

Any suggestions? I am a beginner transitioning from Win 10 to Linux Mint Cinnamon.
Thank you,
Pete

Hey Pete!
Your HP has a different WiFi chip, that’s why it didn’t work right out of the box. I’ve encountered the same with 2 different HP laptops. There’s a small process to install the necessary module, but first you’ll need to connect your HP directly to your router via an Ethernet cable so that you can access the Internet to execute the commands I’ll give you.

Meanwhile, can you boot into your HP Linux Mint, open up the terminal and send me the feedback of the following command?

Vasileios,
Thank you so much for responding to my installation issue. I will connect via ethernet cable this afternoon and run this command in the terminal and let you know what the response is ok?
Pete

I need to get a new usb to load Linux mint. I had Zorin pro on my usb, erased it and now my computer does not recognize the usb. Went in to disk management and tried to format the usb and assign a letter to the usb drive and it doesn’t work .

Vasileios,
This is an email thread, regarding Linux Mint install on an HP, I received from a friend of mine in the USA (I am in the Philippines).

On the Linux Laptop thing:

I try to stay away from HP computers in general. They use to have factory here in Houston.

The market had stronger demand for Dell’s. Texas wasn’t big enough for two computer manufacture’s and HP closed up shop.

Brand name computers tend to use proprietary architecture so you have to buy hardware from them. Compaq (HP), Dell, etc.

made all their hardware, cables, etc. to be proprietary at first. Then people strayed away from them because it was too much

So the first thing to check would be if the machine is compatible. I’ve a Lenovo Laptop that broke the DVD drive in the upgrade to Windows 10, so

it’s not limited to Linux when it comes to hardware support. If the manufacture doesn’t want to support an older machine, they won’t. Also not all

hardware manufactures support Linux. An example is my MOTU (Mark of the Unicorn) USB audio interface. It works fine on the plug and play, but there’s features that

are supported in Windows that don’t exist for Linux, but it’s functional enough to do most of what I want and people are developing software to access

more and more features every day, but the company doesn’t support it beyond the USB specification plug and play requirements.

This is not the only list, you could check HP, but start here to see if it’s listed:

Linux Laptops: Resource for installing Linux on laptop and notebook computers. What laptop and which distribution combines well.

If it’s not there, go to an HP site and see if they have Linux support listed.

The HP website has information (FAQs) on Linux with links to Linux versions and installation here:

Find answers to questions about Linux as it relates to HP PCs.

Information on your machine can be obtained from the HP website by entering your serial number here:

Usually Ubuntu is supported. It usually detects hardware on install.

Arch Linux, if listed, is a bit difficult to install due to the drive partitioning being a manual operation.

Red Hat or CentOS (the free version of Red Hat) by default only configures ethernet hardware that supports 1GB speeds or higher.

I’ve used CentOS before and had to search for a driver for my onboard motherboard’s 100MB ethernet network port. I got it to work, but it was a pain.

There was a notice a year ago that CentOS support was being dropped by Red Hat, but I think the community is still supporting it.

I would recommend Ubuntu, it is Debian based and has the best support. They have an HP Laptop certified page here:

Hardware by HP that have been certified for use with Ubuntu.

I only buy Public surplus computers anymore. Here in Houston, there’s so many city government agencies, offices, and schools that change out their machines every 3 - 5 years

that go up for auction and I’ve been able to pay $40 on auction for machines worth several hundred dollars. But they come without a hard disk and sometimes no cables, keyboard, or mouse.

But $40 for an i7 intel machine is a good bargain.

A $40 computer, a $60 SSD, a free Linux distro, and in a couple of hours I’ve got a working computer waiting for the next lightning strike. LOL

Here’s the link for Public surplus, you can filter by region and agency. I will say that Laptops tend to get more abuse than the desktop’s.

Most of the desktop, or slim line Dells, show very little use at all. Like, do those people do anything? And they seem to come from dust free environments.

You have to register, pay online, and go pick up the machines, but you can have someone else pick it up for you if you wanted.

They would have to have the receipt.

I barely fit it all in my truck and it cost me only $140 dollars. But it was listed as miscellaneous electronic equipment.

I put hard drives into a couple of the computers and sold them to friends for $40 on one and $60 on the other.

Sold a toner cartridge for $60 on ebay. So all it cost me was gas money for all the rest. … until my friends experts started showing off their computer savvy.

Big mistake, too many service calls. After a couple of years, the problem child had her house exterminated and the computer fan sucked in the pesticide and it wouldn’t reboot.

Problem solved. I had been warned, but I figured with Linux they would be able to F them up. They found a way, usually lost credentials on email, changed IP address, etc.

Again, no hard drives, but those are cheap if you buy the spinning ones and not SSD’s. SSD’s are $60 for 500GB, which is plenty.for most people. They may be cheaper now.

Windows 11 is out and it won’t run on most older hardware. It requires System firmware: UEFI, Secure Boot capable, which seems to be the biggest hurdle, but there’s also TPM 2.0.

I don’t know what TPM 2.0 is, but I’ll be waiting for a while to upgrade, if I upgrade.

Anyway, that’s about all I have to offer about LInux, Laptops, and cheap computer sources in general at this time.

Let me know if you have any other questions.

Vasileios,
I just fixed my usb using the CMD prompt. Formatted it and will now install Linux mint with Balena Etcher so I can do a dual boot. After that I will connect using the Ethernet Cable and I will run the command you sent me in the terminal and let you know the results

Vasileios,
I ran the command you nsent me innthe Linux Mint terminal on my HP Laptop. The response I got is included in the attached photo. Please let me know what you think. This is a real learning curve for me.
Thanks for your help.
pete 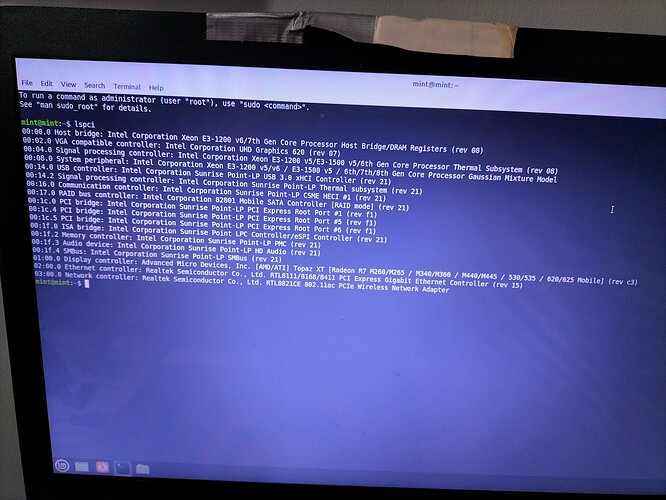 it seems that this has been solved on the linux mint forum here:

I managed to fix the wifi issue.

I clicked on “Activate a connection” and it immediately connected me to my wifi. Installing it alongside Windows 10 right now.

Hey Pete!
Thank you so much for the posted info! I have 3 HP systems (one desktop and two laptops) and all of them run on Linux. One of them has exactly the same Realtek model as yours. All it neeed was the dkms module installation and runs flawlessly - including its touch screen.

Per the Dells, they are great systems, but I don’t have much personal experience with them. I do have experience with the Z-Range workstations from HP running Linux and the high-end compositing suites, such as Flame and Inferno. Those systems are incredible, but also quite expensive.

I’m glad you got things working, and thank you @MrDeplorableUSA for posting the link to the solution!

Vasileios,
I want to thank you again for helping a “Newbie” and also thank @MrDeplorableUSA for his input too (love the “deplorables”).
This is such a huge learning curve for so many of us in the Windows 10 world and without your help it would be extremely frustrating.
Thank you again oh wise ones! If you get to the Philippines, you can stay at our home, we’ll be your tour guides.
Pete