When using your own VPN, will websites still deny access?

Some websites don’t allow access when I am using Proton VPN; I have to turn it off in order to access these sites (my bank, for example). If I set up and use my own VPN will I still be denied access to these sites? In other words, would my own personal VPN be recognized as a VPN?

Hi Margo, I have set up and use my own VPN with Linode and OpenVPN. Unfortunately, there are some websites that will not load unless I turn off the VPN. One site like this is makeuseof.com. I get “This site can’t be reached.”

Thanks @LibertyMom. That’s what I was afraid of. Seems there are more and more websites that are not allowing access with a VPN.

Hey @Margo and @LibertyMom!
My guess is that you could try connecting to another server. Sometimes, bad actors go into a VPN server and cause havoc, which ends up causing bans on that server. The same can go for the private VPN, in the case the previous IP owner was a… well, moron! And there are plenty of those, unfortunately.

I just went to the website, Liberty Mom had an issue with, and it popped up normally, while I was connected to ProtonVPN in Washington. The only difference I have is that I’m using the Midori Browser with its Adblocker extension. 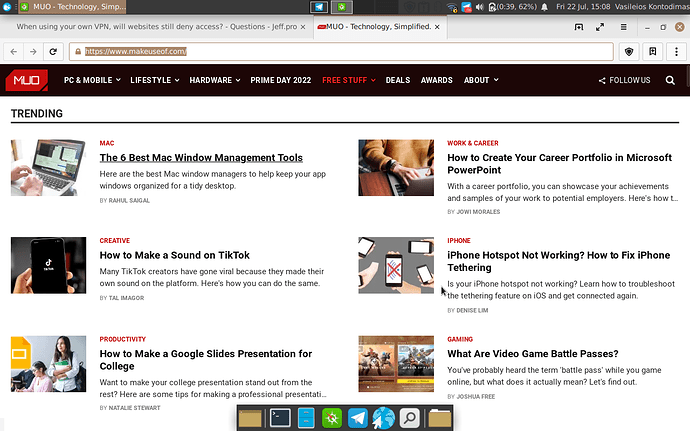 @vasileios, are you saying that websites do have the ability to determine if I am using a VPN? Is it able to distinguish a private VPN from a commercial VPN (like Proton?). If a website is able to determine that a VPN is being used, can it be set up to deny access? For instance, I cannot even access the login page for my bank if my VPN is on, regardless of the server that I choose using ProtonVPN.
When I first started learning about setting up my own VPN through the LMS (I have not done it yet), I thought that one of the benefits would be that it would not be detected as a VPN since it is private. Am I wrong?

I have at least 1 VPS with an IP that is blacklisted (IP Blacklist Check - Email Blacklist Checker), so some site doesn’t come up and I can’t get it off the list because anyone can sign up with the VPS provider and they don’t know if someone is using their VPS for spamming.

Hey @Margo!
It’s pretty much as @Ai pointed out.
What happens with commercial VPNs is that some websites record to see if there are many registered accounts that come from the same IP address. If yes, then that address becomes a VPN server candidate. And if a bad actor originates from the said IP, then a block is initiated.
What usually happens is that the VPN provider will go to the black list websites and request the removal of their server from those lists - or otherwise release the IP for a while and assign a new one, until the “blackness” fails due to address inactivity.

The same can go for a VPS IP. It happens that some scammers get assigned an address and start sending all kinds of spam emails. That results into blacklisted IPs, which the scammers later on give up. And that address drops into the arms of another person. I’ve had this happen too, and I went forward to request removals from that list.

However, there are some black lists, like some Swiss morons I know, who spot a bad actor in a VPS service provider’s infrastructure and they ban all the IPs of that provider - because of something one idiot did. And they claim they can whitelist the individual IPs for a time and… for a fee. I consider that black list service as a mega scammer - as it seeks money from everyone that resides on the same service where one bad actor once was.

I don’t mean to sound negative but it seems that as soon as someone comes up with a way to protect our identities and privacy then the system goes into overdrive to find a way to eliminate it. I was on a Proton VPN for quite awhile but as time went along various websites began requiring that I shut my VPN off. I finally discontinued the service.
Like Margo I was hoping that this new private method would help avoid that but it doesn’t look like it. I’m going to try it anyway so I do hope it works out.

Hey @Pioneer1,
I have noticed that Truth Social has been targeting ProtonVPN more than anything else. NordVPN has less issues and Surfshark has even less. My private VPN on a VPS has zero issues.
Some websites also appear to be picky with which VPN they allow in. In that scenario, you can attempt switching servers and trying again.