Trying to update the FreeTube app, but it says current version is already installed

My wife enjoys using FreeTube and it says there’s an update available but when we download and run the updater, it says it’s already installed. There is a bar on top of the app that says a new version is available and keeps showing up. She goes to install it and it keeps saying a stable branch is already installed. Looking at the About setting in the Freetube app says it’s version 0.16 beta. The update says that it’s for 0.17. She updated to the Flatpack version. 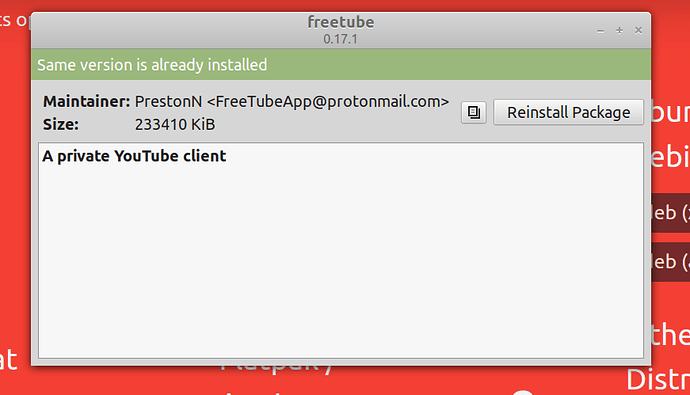 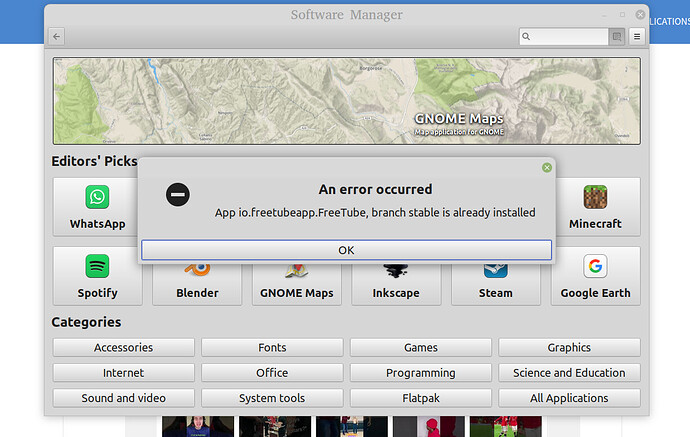 Are we missing where the new app is or is the old version not updating?

What was the original freetube 0.16 beta installed from?

From the Freetube web site. We installed the .deb file. So we downloaded the supposedly new .deb file but it said it was already installed. So we did the flatpack and that put a 0.17 on there. So we’re running that one now. Not sure why the .deb didn’t install as an update.

I would say if you use a deb, unlike a ppa/repo you would need to uninstall the old pkg first then install the new deb.

Okay, is that more common to uninstall and reinstall programs when using a deb?

I would say yes unless otherwise noted by the maintainer. You “usually” won’t loose any personal data/preferences unless such a thing that coincides is made obsolete in the newer release. There are also instances where an application may store files in a hidden folder under your home directory to keep your preferences each time the application is launched, under /home/user/.cache/ etc. IF updating becomes an issue it may be best to rename or remove the old working dir to allow for the install of the newer packages .cache folder. It’s a tricky situation.

There’s also the off chance that someone at freetube posted the “new version” with the wrong code/descriptors and since you had .16 beta installed the code/descriptor inside the new .17 said it was .16 beta still.

Many possibilities. Again, my preference if it was installed from a .deb, remove old deb, install new deb.

Hope this helps and wasn’t TO confusing.

Hi I’m back after a delay. So I went into /home/user/.cache/ and could not find any folders that look or seem to be FreeTube related. We used the uninstall feature in the app to remove things, and I also did a “sudo apt remove freetube” command in Terminal to follow another method.

Then we went back in to re-install Freetube and we get the message “this version is already installed”. That’s not helping. 0.18 is having some issues where it’s not saving correct info and we’re trying to do a fresh install from scratch so as to have no “stuff” to fall back on and be an error.

Uninstall the flatpack version the same way you installed it.

I didn’t see a reference to what distro you were running. Search freetube in your particular distros package manager or download the latest deb file(Debian, Ubuntu, Mint etc) and use the sudo apt install for deb packages.
a deb install can be done a few ways:

I suggest using this last method

We’ve been doing the .deb install. We’re using Mint. But we might have done a flatpack at one point in our attempts. So would that be a case of installing it by flatpack again and uninstalling by their method? What is the terminal command for doing a flatpack uninstall? Would that mean we have dependencies that are interfering because of an old flatpack install?

I have never used a flatpak install so i couldn’t be certain. Do a quick search on the command of type flatpak --help maybe it will list the options.