Trying to get the laptop fan to be quiet running Linux

We’re two months into running Mint on my wife’s HP Envy and lately we’ve had some louder fan situations that we’re having a hard time figuring out. I have run htop to see CPU usage and we’re seeing only low CPU usage of 3 to 4% on only a few apps during normal use. We were getting 100% readings on iDrive for a bit, but we seem to have that fixed thanks to some support from them when we set something like “multiple chunk uploads” to “no”. But still we’ve got a bit of fan noise that we don’t think should be.

The main apps my wife runs are Thunderbird, Brave Browser, Skype, and Telegram. We did find a topic on here about fan noise where someone did some setting changes to Telegram and that helped her, but we see no change.

I did open up the Envy yesterday and blew out dust from the fans (and since the laptop was closed, when we opened it up to boot, we found a cool “keyboard pattern” of dust on the screen…LOL), but that hasn’t seemed to help either.

I found on another board someone was suggesting using “tlp” to change a CPU setting to “balance performance” which is the default I see. But I see there is a setting in their documentation for “balance power” and I’ve seen a “powersave” mentioned and wondering how do I apply that. Will that keep the processor in a slower mode to “not run the fans”? 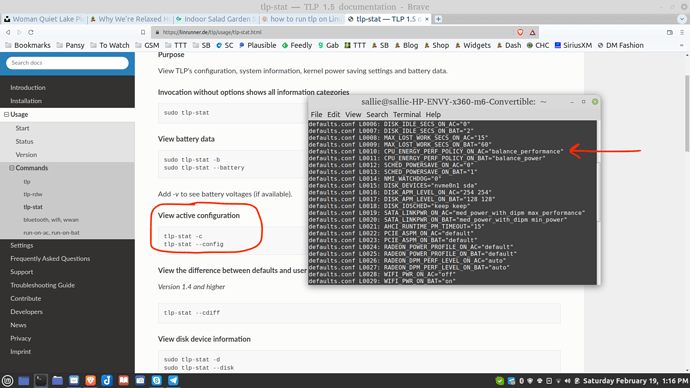 Hey @DavidBorrink!
How about making your life easier and install cpu-power?
You can install the Synaptic Package Manager via:

And then run it and search for cpu-power.
Install the GUI version and run it. Then, you can select the respective governor for all the cores of your CPU and set a maximum frequency so that your system does not overheat.

Oh man, that sounds better. And a GUI to boot. Much better. I’m okay with command lines most of the time, but anytime a GUI is involved, it makes my wife’s life much easier. Thanks for the tip!

Would you happen to know a good reference on frequency settings? I found the settings in tlp, but it’s not obvious what I’d do next nor what setting I should try. I didn’t even know this was all a thing before today. LOL

Actually I found that the Envy has "a base frequency of 2.50 gigahertz, that can leverage a frequency boostable up to a max of 3.1 GHz, " I see that the current settings in tlp say…

… so would that mean I should bump that scaling_max_freq down to 3100000 to match the specs I saw from this one article?

Hey @DavidBorrink!
Apologies for my delay. Deadlines appear out of nowhere!
For a powersave governor, you can go much lower than 3100000 KHz. In such scenarios, I would recommend you keep it even lower than the base frequency, like 2100000 KHz.

Hey thanks for replying. I know what you mean. I’m dealing with juggling a few projects and sometimes replies have to be delayed.

Okay, so a much lower setting is doable like 21? That’s good to know. SInce my wife does mainly surfing and writing, she doesn’t need power usage except for maybe video recording for a broadcast once in a while. So if that low of a setting is recommended, it gives wiggle room to try things. Thanks again for a GUI option for this.

Hey @DavidBorrink!
The GUI is the simplest and fastest way of doing it. There are the terminal commands too, but I figured you can save some time with it. When you guys need extra power, then you can set the CPU Power to the Performance Governor and allow the speeds to go up to the recommended frequency.