Stuck Screen on Ubunto after Install

Help ! Every time I start my computer after having installed Ubuntu, I get the following and my screen locks up??? 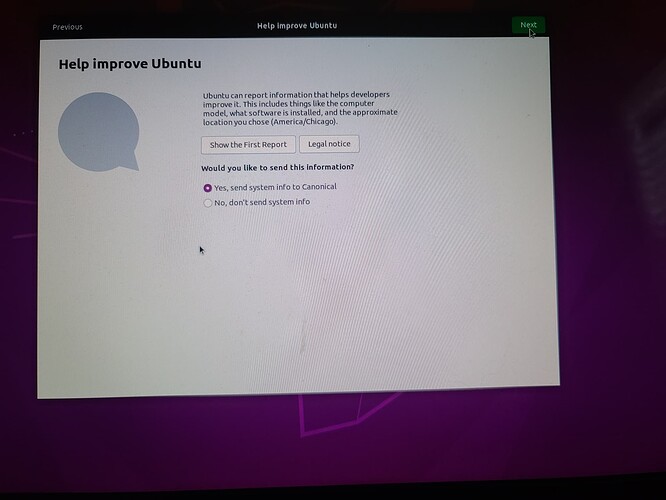 Hey @Jayhawkat -
Does it fully freeze for more than 2 minutes? In bad scenarios, when a service takes too long to start, it won’t ask for more than 90 seconds.

If your screen is frozen for more, it could be a firmware issue with your system. In that scenario, I would recommend going inside your BIOS and resetting it to default values (usually on the last tab of the BIOS screen).

If that doesn’t help, you can boot your system and tap the Escape button. If your boot loader pops up, select your normal boot drive and keep on tapping the Escape key until you get the Ubuntu loader screen. Then select the “repair” or “fallback” option, which is usually the last.

Ubuntu will load in a safe, non-graphical environment. Select to activate the network and then drop you to a root console. While you’re there, type the following:

This will fully upgrade your system with all the new packages, libraries, and kernel. Hopefully, this will help resolve your issue. Once done, type:

And allow your Ubuntu to load up normally.

Ah, that makes sense then. A hard drive issue will always - in some way or another - freeze your system.

so I need a new hard drive?

If the fcheck cannot fix it, perhaps you might need to consider it, yes.

fcheck? … I had this computer set aside with windows 10 and only used it to play movies … it seemed to work fine, but then again the movies were on an external drive … the computer first boots up … I get this …

That would be via the Advanced Options.

the grub line is under advanced?

Grub has to do with the booting process, so you don’t need it for checking up the hard drive.

Of course! If I weren’t on the call, I’d probably jump on my desktop and give some more directions. Good luck and hopefully you won’t be needing a new hard drive!

ok … so it wouldn’t load Ubuntu, but loaded Mint fine … I did the call too … “multitasking” …

My pleasure! It seems that Ubuntu wasn’t able to perform the kind of “dancing” it wanted.

I tried loading the different flavours of Ubuntu … still no luck … I think for this particular laptop, I will stick with Mint … maybe the hard drive is “dying” … but I will nurse it for awhile … one thing … I have lots of practice with downloading, rufus and etcher …