I bought an older MacBookPro to learn on and have a few usb drives set up that it can boot from: Ubuntu, ElementaryOS, and Garuda KDE Dr460nized. I had to plug the computer into ethernet to get it to load the Elementary and the Garuda (haven’t tried the Ubuntu on the new-to-me old computer yet, only as a VM on my everyday MacBookPro).

If I download drivers or change any settings while running from a usb, where do those changes get saved? Or do they? On the stick itself? On the hard drive? Will the changes in the first reset when I change to a second distro and come back to the first one?

If I don’t get an answer, I’ll try it myself once I get through my next few busy days, but I thought it wouldn’t hurt to have an answer here for those who might want to know in the future.

@Persephone it is my understanding that while testing using the USB, no changes are saved until you actually install it. I hope this helps. If I am wrong - let me know.

Hey @Persephone!
As @BigDaveAZ mentioned, any changes you do while running the Live USB will only be retained for the current session you’re on. After a reboot, everything reverts back to its original state. This does not include a full upgrade (especially with Kernel images).
To have drivers and - generally - changes remain, you will need to actually install the OS.

Thank you @BigDaveAZ and @vasileios! That makes sense.

Given that, I feel like I want to play round with the three distros I have before making a decision. Or should I install one and play with it for several months, then install another to learn about, and then the third after a few more months? And then make a decision? @vasileios, I know you mentioned being able to save a file on an external hard drive or usb stick that will port all my settings from one install to the next; is there a lms module on that?

Plus, I need to figure out wifi. The only internet connection that seems to work with my attempts so far is ethernet, which is limiting.

In addition to wifi, I want to figure out which distro has the features I want plus the other apps I need (for example, I’m definitely a Mac girl in terms of desktop gui; and I know there’s a Linux version of Reaper, just don’ t know if it works on all distros or how to download it; and I want to get back into WordPerfect to see if it’s as wonderful as I remember). All of which means I need to figure out how to use Docker or flatpacks or Snap (I think those are my three options ).

But if I learn something on one distro, for example, how to use Docker, would that automatically apply to another? And I haven’t seen NextCloud on any of the app stores I’ve looked at, so that’s another thing I need to figure out.

Thanks for letting me think out loud. I’m getting ready to work our election (not day, season!!!) and will be incommunicado for a bit starting later this month, so I’ll get back to it when I can.

@Persephone Glad to help. I think you have quite a handle on it so here is what I suggest - try the Live version of a couple of distros and see which ones you want to give a closer look at, then try using them on a daily driver for a month or two, then try the next that bore a closer look. Is WordPerfect a free suite at this point? If not try Libre Office it is a full office suite totally FOSS. As far as learning on one distro and being able to just take what you learned and use it on another, that will depend on whether it is a fork off of the same family - @vasileios can explain that better. I will always try to help. LOL. Cheers!

Hey, @Persephone!
The process is very simple, actually - which is why I haven’t included it in the LMS. I’ve made several references both here and on the Live Workshops on it.
Basically, what this means is that you go to the /home area from your file manager. There, you will see another folder with your username. Copy that to an external drive and then copy that back to your new Linux distro.

Mind you, at some point you will need to install the respective applications for their settings to take effect. However, everything else will pass on normally.

At some point, I might do a small snippet of a video like that on the Rumble channel.

Hey @BigDaveAZ!
As far as I can see, WordPerfect offers a trial, which means it’s paid.
Other free suites you can use are Libre Office and Only Office, both of which are available on the repositories (or the Flatpaks).
Additionally, NextCloud comes with its own Office Suite too, which supports collaboration out of the box.

Yes, @vasileios and @BigDaveAZ , I think it is free. I believe there’s a complementary serial number since Corel isn’t able to support Linux anymore (Thanks, Bill Gates. Another thing you’ve ruined.).

The process is very simple, actually - which is why I haven’t included it in the LMS. I’ve made several references both here and on the Live Workshops on it.

Ha, ha! You forget that ‘simple’ to you can be a real challenge to a newbie. Tell me like I’m 5 years old.

I’m having a hard time working through the LMS because I like things to be logical and built up step-by-step, and the LMS is like spaghetti thrown against the wall. I wish I’d had a 20,000 foot view of the landscape before getting into the weeds. Cheers!

Hey, @Persephone!
There are two ways to copy everything. The simplest one is what you’d normally do on any other OS. Simply copy and paste. In this scenario, you simply copy the folder inside the /home directory, like the screenshot below; 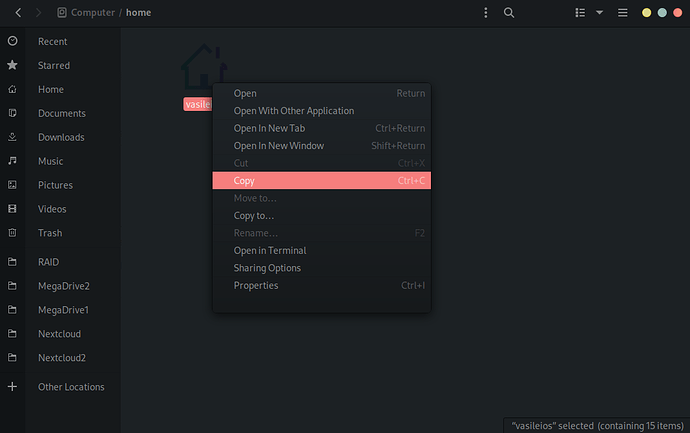 Then navigate to your external drive, right-click in the empty space and select Paste and that’s it.