Question: I’m running Linux Mint 20.2. I was watching a YouTube video on running the play-in-mpv extension on Brave. I have Python installed, I installed pip. The terminal inputs have run without error. When I run play-in-mpv in terminal it will not run. I’ve created an autostart file which errors out as well. This extension allows you to run YouTube and other videos in MPV so they’ll run better. Need Help

Were you able to visit the GitHub page of the extension? It appears to have extended info on how you can make it function properly. 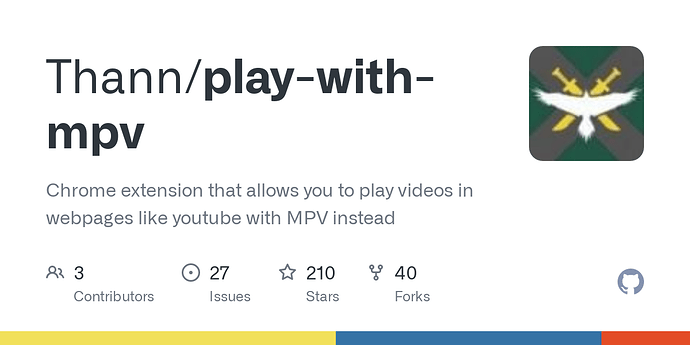 GitHub - Thann/play-with-mpv: Chrome extension that allows you to play videos...

Yes. I installed the GitHub repository and was able to install it.

Using Brave could have a side-effect that Firefox has with tracking-blockers and anti-ad extensions. When doing live conferences, it appears that users who have anti-trackers engaged, experienced issues with no sound. The moment they “trusted” the site, all issues were resolved. As far as I’m aware, Brave has that option from within settings. At the moment I’m not on a system that runs Brave so I can test it.

Okay, I did a test run on Chromium (non-Google Chrome).

First, I had to install the GIT version of the server via pip3 as pip itself produced errors. Then, I had to update youtube-dl as the APT version appears to not be compatible with the extension. Therefore, I purged it first - before I installed the more fresh version via PIP3.

Last, but not least, you’ll need FFMPEG, which is easily installed via:

Then, the executable file for the server is located in the following folder:

From my first experience, the buffering appears to be quite slow - at least on YouTube. However, it works.

Please have a look at the above - if they work on Brave (I have it installed on all the other systems, minus this one). If not, I’ll install it and have a look.

Thanks! I got it working!!