I grew up with "Ham Radio"

I never got the bug, but I do remember a lot of things the way it use to be. My Father as the story goes, got his licence, right before he enlisted in the Army Air Corps in 1947. He had just turned 18. Any way, from a very young age, I got to go to “ham Fests” spent the night camping out at “Field Day” 48 hour civil defense communication week ends, and my favorite… the “find the transmitter” triangulation day. He also had an old Army Surplus teletype that he would connect at Christmas time and it was fun to see some of the things that the “Old Operators” could send across the airways in the old analog days. I remember a complete Nine Reindeer and Sleigh with Santa Banner taking 20 to 30 minutes to print out on old yellow tinged surplus roll paper with the teletype bell doing “Jingle Bells” the whole time. He was also into building his own equipment and swung a mean soldering gun. I learned not to touch the smoking end the hard way when I was about 2 years of age. Although, I never new him to use a computer with his radios, he might have after I was out of the house. I do remember him talking about it with a couple of his students who were out of school and at one of the Radio Club Picnics. This was before Apple and IBM days. He taught math and physics at the high school level. And he did talk the school board to buy a couple of Apple 2,s to start teaching computer class in the beginning, but after a year or so they took it away from him and put computers in the business department. It involved dumping apple and getting a lot of IBM pc’s…just for fun here is his radio bench vintage 1956…
**Iberius 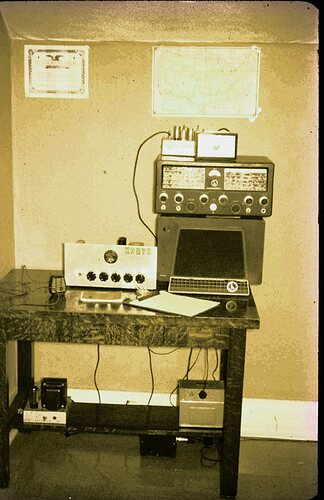 My dad died in September. He was 92. He enlisted in 1947 and ended up doing radio surveillance with the Army Security Agency (ASA).

Growing up he was always tapping out something in Morse code that he said was “best bent wire”.

Sorry for your loss… My father started with code early on, said he had to save his penny’s to buy a microphone. Later, after the teletype fork of the road, he went back to Morse Code. He picked up a quality “keyer” where the paddle was vertical, and the toggle action would “send” by pressing either side of paddle… build for speed. After a while he got discouraged cause he was still never in the same league as the “old Hands” as he called them. His next thing was he built what he called his "Key Board Keyer ". This was when early processors (Texas Instrument) came out and it must of had a form of memory, and he took the key board from a early IBM Selectric typewriter. He programmed it to convert keyboard to Morse Code…then he went looking for “Old Hands”…(he could type, fill up the “buffer”, and control the speed that was sent) But then again the “Old Hands” soon would call him out, cause he sent too perfectly…and they could know who they were talking to by “the print of the hand” sending code. He enjoyed telling them all about his “Keyer”. I looked thru all the photos that I copied from all his computers and could not find the “Keyer” but this photo might be interesting…
My father, with one of the machines he worked with at … Langley Army Airfield
Iberius 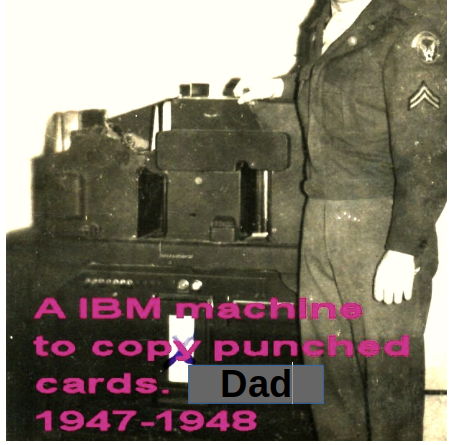 When I first got into radio as a news person, I spent a lot of time at the teletype. Go in early in the morning and tear off the giant length of yellow paper that AP sent the news to us on. Those were the days.

It took most of four months to clean out the back room of the basement that we called “Dad’s Play Bench”… The old teletype and much of the things that could be re-purposed went to one of the “students” mentioned in my first post. I think he uses computers in regards to his Amateur Radio hobby. He is retired and lives just up the street. It took three pickup truck loads for the “good stuff” and another four to the “dump”. Any way as you said, those were the days…
Iberius

Very much enjoyed your story. I’m an SWL (listener and RX logging) only on the amateur radio bands. Mostly 20 & 40 mtrs. My very best regards to you & yours…

CQ …CQ… Ed
Boy that brings back memories… I forgot “73’s”…
Dad was very excited around 1962…Mom got tired of hearing about “Echo” and after a time she wanted him to do something with all the QSL cards laying around. One day I remember the mail man pulled into the driveway and asked us kids if Dad was home.
He wanted to “hand deliver” a special “Card”…from the The Amundsen–Scott South Pole Station, as he said it topped his mail delivering career. It was one of Dad most favorite cards. by the way your signal is 5 by 9… coming in clear…
Iberius