Hello, I chatted with an admin in the Telegram group last night regarding my wifi adapter not working. I have a Realtek RTL8822BE and I was directed to the following link.

When going to the repo mentioned (by lwfinger) it is no longer listed as a repository in his account. Is there an alternative driver for this that you would recommend?

True, some repositories disappear as time passes, especially if they belong to individuals. However, there is the GIT version of it. Open up a terminal and execute the following commands, one line at a time:

Once done, you can reboot and check if it works. Remember to connect your system via ethernet cable to your router so that you get Internet for the above commands to execute.

Well, there are no errors installing the above driver, however it still does not get the wifi adapter to start working. Any other thoughts?

This is a persistent one, isn’t it?!

A few others who had the same issue had it resolved with the above driver. Perhaps for it to work, it might need some additional firmware. Let’s see if that works. Open up a terminal and execute:

The lines are longer than the screen space, so make sure you copy them up to the bin extension.

Once done, reboot and re-check. Then, please let me know how that goes!

Sorry for the delayed response, I was out for a few days. After running the above commands, the wifi is still not working after the reboot. It shows “Device not ready” when trying to connect to a wireless network and no wireless networks show up.

Okay, let’s try a different approach. Generally, the AU drivers are compatible with the BE, but I found a better option - hopefully!

Open up the trusty terminal and execute:

This should give you the info on your WiFi - which is probably disabled.
The reason it’s “visible” but not ready is due to a misbehaving driver that is currently active on your system. That’s why the previous installation had issues too.

This will download and build the binary file for the current driver. However, before we install it, we’ll need to get rid of the previous driver(s).

With those gone, now we can install the driver:

Once installed, time to activate it:

Normally, your WiFi should become available immediately. If not, try a reboot.

Please let me know how that goes.

Here is my terminal output after the git clone step. It isn’t finding the ./make, any ideas?

I’ve also noticed that this directory is embedded under my user directory. 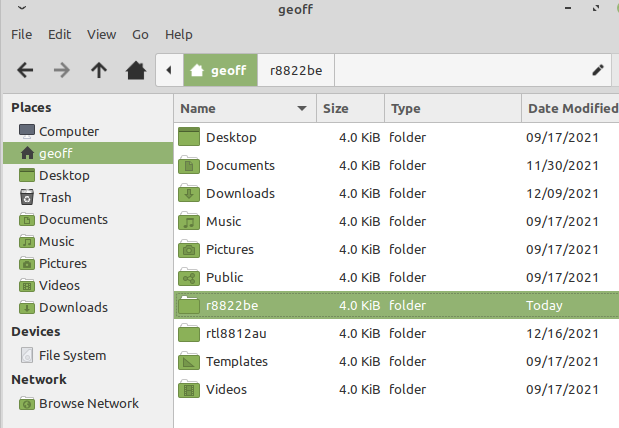 Ah, yes, it would appear the relevant commands are not installed. You can fix that by executing:

Once those tools are installed, then you can go via the make command again.