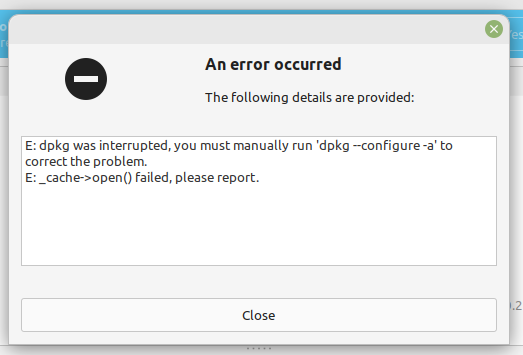 Trying to install updates on my Mint installation and getting the following error message. Where do I run the suggested command from in the terminal window?

E: dpkg was interrupted, you must manually run ‘dpkg --configure -a’ to correct the problem.
E: _cache->open() failed, please report.

I changed repositories and it worked fine.

Hey @harvlake!
A change in repositories resets the cache and the packages, so it can work. The other options are the following (on the terminal):

And the one the app itself recommended:

Those two sets are certain to fix any installation/update issues.

I think my problem was the sudo. I wasn’t using it to run the suggested command