Hello, @vasileios I am now using Zorin 16 and like it very much. It is my favorite distro I have tried so far. My previous drive was Ubuntu Budgie and it was nice as well. One little app I really liked in Budgie was the quicknote applet that set in the system tray. It was supper nice for storing links and and terminal commands quickly for future use. I really miss this little applet and have not found a comparable replacement. Other note apps clutter up the desktop and I like my desktop clean.

I tried to install it in Zorin using the following

I used this source.

How to install or uninstall budgie-quicknote-applet on Ubuntu 20.04 LTS...

It is not working and I can not find the app install location.

I would think their would be a way to get working as Zorin is ubuntu based.

If you would happen to know a method of doing this it would be wonderful. Thanks a lot!

Hey, @Shane!
Unfortunately, it’s a Budgie Desktop Applet, which means it’s designed to run on Budgie. This desktop environment is based on Gnome, but it does not follow the exact Gnome Shell, so, it’s expected to get errors or nothing at all when you try to install it.

I did a little search per an app that might come in handy and help you organize notes and everything. I came up with Joplin - which is free. It allows sync (you can do it in a folder, like a network drive for all your devices or cloud), tags, different categories, notes etc.

It also has code recognition, which makes it easier for our tasks. (The left is the note, the right is how it appears - much like this forum). 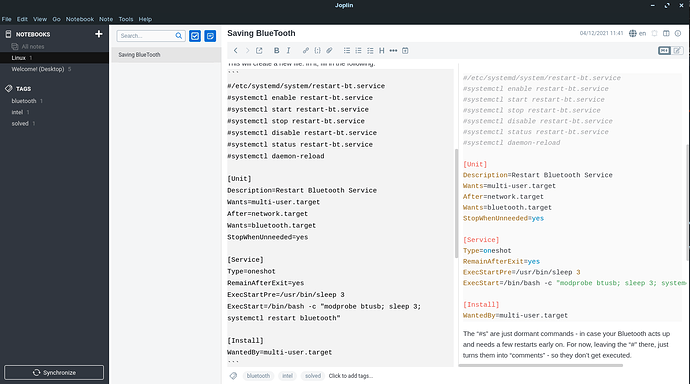 If you want to install it, you can execute:

It will install the AppImage and also setup the Icons for it. This means you can add it to your favorites bar. When you launch it the first time, you can go to settings to activate the Tray Icon, in case you need it.

It’s much more detailed than QuickNotes, but it doesn’t clutter your desktop at least.

Thank @vasileios I installed that and its working nicely. Will be much better for me seeing some of the things it looks like I will be getting involved with in the near future.