Sorry if this is a repeated issue, but I couldn’t find the topic in the search.
I’m converting a mid 2015 MacBook to Kubuntu. Downloaded and installed it on entire MacBook from USB. No more macOS.
Here is the current issue I can’t find any online solution: 3/4 white screen desktop, applications (such as Firefox) appear with no problem.
Any ideas how to fix the display issue? 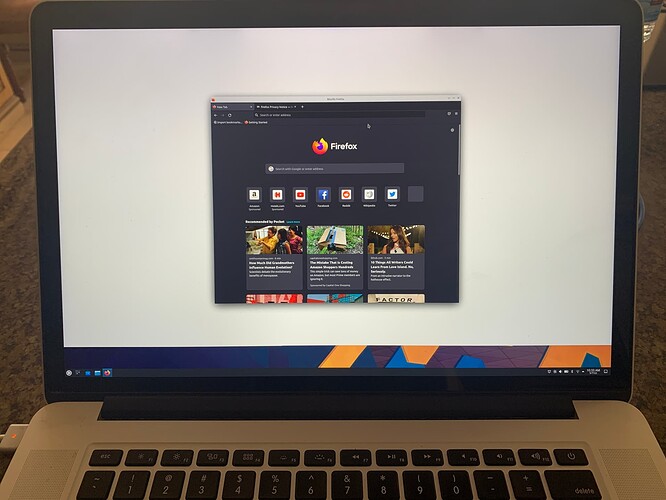 Hey @RICO and welcome to the forums!
When you encounter display issues, 90% of the time it’s a kernel module. So, what you’ll need to do is to instruct the boot-loader to avoid it. Open up your terminal (in KDE it’s called konsole) and type in the following:

Enter your password normally (it won’t be visible) and hit Enter once done. It will open the text-based editor for you, where you can only navigate with your arrow keys.

Find the following text line that begins with:

Go to the end of it, and inside the quotation marks, add a space and then the word:

Press CTRL+O and then Enter to save, and CTRL+X to exit.
Once you’re back on the terminal command, execute:

Then reboot and check if this works out for you.

And you nailed it!!

Thank you very much!! I’ll be doing the same to the other computer having the same issues.

I’m glad it worked out! I’ve been through these things myself too, hence the knowledge.

Also, if you ever install Linux on a system with an NVidia card and want to have multiple monitors, the open source driver might prove a bit stubborn (one screen may appear half-way active). In that scenario, you’ll need the actual NVidia drivers. But we’ll cross that bridge when we get there.

Lots of experimentation usually does the trick. If you can bypass the initial frustrations, you’ll end up with a much sharper perception of the OS.

well past the point of being intimidated, and well on my way to discovery having no background in programming, so began with cut and pasting commands to discover they work and it they don’t it is pretty unlikely to create a problem

dual booting for now works for frustration, and am ready to also check out other distros that may be less terminal dependent

You might want to try Zorin, Mint, or Elementary. Those are pretty UI driven.

thank you for the verification, as I have both Zorin, and Mint ISO downloaded
Just need to put them on empty zip drive and I think use Rufus for the install for test drive

Or it may be time to learn some programming, which is admitting Kindergarten level start point
Always amazed at the level of expertise from you and others, makes it so much easier

I’m dealing with a nuisance at this point. Even though I’m not using multiple monitors (maybe in the future), I have this flashing on my screen.

I have an external DVD player plugged in while I’m using Handbrake. On the second pass, this doesn’t stop flashing on the screen, and I can’t close it until the DVD is done encoding.

Any ideas that causes this during Handbrake? 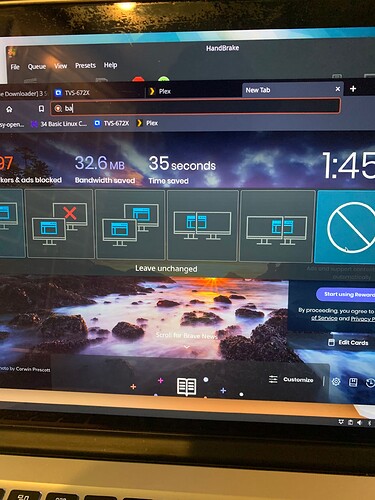 Hey @RICO,
It seems that Handbrake’s preview (? - not sure) triggers KDE into thinking it has a secondary monitor, which is why you’re seeing this. Probably because the DVD has copyright protection? For the record, Handbrake can rip copyrighted DVDs - which might be the reason for this behavior (it’s the only free app that does, as far as I know). I’d consider it a bug, personally.