Just saw the update notice for Libreoffice on JP Tech Chat channel. Downloaded the deb version 7.2.5, but can’t install it. I looked up the terminal commands needed to install it and followed them, but all I get is that I already have the latest Libreoffice version 6.4.7.2. I’m running Linux Mint. Am I mistaken that the deb version is the one I need? Tell me I don’t need to uninstall the old version. The documentation I read on the 7.2.5 said that an uninstall is not necessary. Any ideas?

Hi famcoll. Usually a Debian/Ubuntu family distro (like LM) will already be enabled to install .deb files, by just double-clicking a .deb file in your file manager, and a dialog box will pop up to begin the installation of the .deb file. In that case, you don’t need to use the terminal or install another package.

I was in the same spot as you, when I read this post. I’m using Linux Mint 20.3 Una, base: Ubuntu 20.04 focal. [You can run “inxi -Fxzd” in a terminal (no sudo needed) to learn about your pc’s current configuration.] I also had the same LO version as you. So I decided to update my LO and give you feedback on what occurred for me.

I really wasn’t wanting to go through the long and tedious task of removing all of the dozens of separate entries for LO, as shown in both the LM Software Manager and the Synaptic Package Manager, as I’d done a number of times in the past. I decided to just go into the LM Software Manager and install the Flatpak version, instead of looking for a .deb version. That’s what I normally do. Flatpak usually has the latest version of any package. I figured I’d take my chances on whether or not it automatically removed the old version of LO, which it didn’t, since it had jumped from 6.4 to 7.2. In a X.x upgrade, it might overwrite the earlier version, but apparently not when going from an X.x to a higher .x or a different X.x version.

Fortunately, there was a single entry for LibreOffice. I right-clicked on that entry and then clicked on the fabulous “Uninstall” option which LM has given us. So great that we can uninstall right from the menu system, without having to go into the Software Manager or the Synaptic Package Manager. Too bad that all Linux distros don’t provide that easy option!

That click led to LM’s uninstalling all of the old LO elements, in the background, while I did other work.

So, I got my LO upgraded and was able to give you some feedback on a similar situation.

Hey @famcoll!
Uncompress the tar.gz file you downloaded. Then go into the debs folder, right click on empty space and open it in terminal. Then execute:

That should do the trick for you. However, you will still have both versions of Libre Office on your system - thus you might want to uninstall the original one first.

Note: On every update, you will need to do the terminal installation process again. However, this will update your previously installed packages (the ones you installed via terminal). Something to keep in mind.

tried it. seemed all going well, but in the end, I still got the old version. See screen shot. 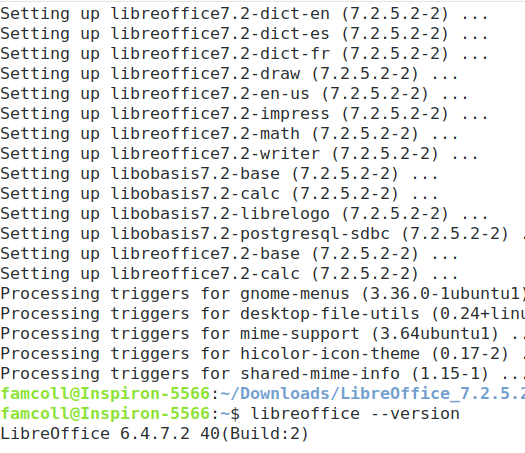 I still haven’t uninstalled the old version. Should I try that next?

it is suggested to run this before installing the latest version

Yup, just as I suspected. You can either ignore it, or go to your Software Center and spot the two Libre Office versions there. You can then uninstall the 6.4 version one.

I did this and ended up having to restore my computer using Timeshift.